This plan was created by another user. Make it your plan
Edit start date
Want to change plan duration? 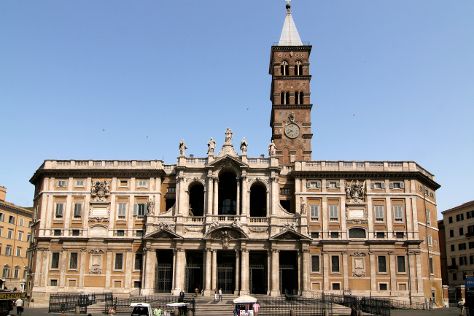 Aptly nicknamed the Eternal City, Rome is the birthplace of the Roman Empire, one of the world's greatest civilizations ever.

On the 10th (Fri), contemplate in the serene atmosphere at Basilica Papale di Santa Maria Maggiore, steep yourself in history at Roman Forum, then contemplate the long history of Palatine Hill, and finally explore the ancient world of Colosseum. Keep things going the next day: explore the world behind art at Galleria Borghese, appreciate the extensive heritage of Piazza Navona, then contemplate the long history of St. Peter's Basilica, then pause for some serene contemplation at Pantheon, and finally ponder the design of Trevi Fountain.

For where to stay, photos, and other tourist information, refer to the Rome trip itinerary planner.

Jakarta, Indonesia to Rome is an approximately 18.5-hour flight. You can also do a combination of flight and train; or do a combination of train and flight. The time zone difference moving from West Indonesia Time to Central European Time is minus 6 hours. Prepare for colder weather when traveling from Jakarta in April: high temperatures in Rome hover around 24°C and lows are around 11°C. Wrap up your sightseeing on the 11th (Sat) early enough to take a train to Florence.
more less

Things to do in Rome

Birthplace of the Italian Renaissance

Considered a cultural, artistic, and architectural jewel of Italy, Florence is the birthplace of the Italian Renaissance.

On the 12th (Sun), explore the world behind art at Pitti Palace, admire the masterpieces at Academy Of Florence Art Gallery, then pause for some serene contemplation at Basilica of Santa Croce, then take in the architecture and atmosphere at Cathedral of Santa Maria del Fiore, and finally take in panoramic vistas at Campanile di Giotto. On your second day here, view the masterpieces at Art Gallery Studio Iguarnieri, get great views at Basilica San Miniato al Monte, make a trip to Piazzale Michelangelo, then contemplate the long history of Palazzo Vecchio, then explore the world behind art at Church and Museum of Orsanmichele, and finally take in the spiritual surroundings of The Baptistery of St. John.

Before you visit Florence, use our trip planner to discover what you can do and see there.

You can take a train from Rome to Florence in 2 hours. Other options are to drive; or fly. April in Florence sees daily highs of 22°C and lows of 11°C at night. Finish your sightseeing early on the 13th (Mon) to allow enough time to take a train to Venice.
more less

Things to do in Florence

Virtually unchanged for the last six centuries, Venice is actually a group of islands made famous by a series of canals, bridges, monuments, piazzas, and narrow pedestrian lanes.

Kick off your visit on the 14th (Tue): explore the galleries of Doge's Palace, contemplate the long history of Ponte dei Sospiri, make a trip to Piazza San Marco, then admire the striking features of Basilica di San Marco, and finally take in panoramic vistas at St Mark's Campanile.

Ask Inspirock to suggest an itinerary and make planning a trip to Venice fast, fun, and easy.

Take a train from Florence to Venice in 2.5 hours. Alternatively, you can drive; or take a bus. April in Venice sees daily highs of 21°C and lows of 11°C at night. Wrap up your sightseeing on the 14th (Tue) early enough to travel to Paris.
more less

Things to do in Venice

A beautiful and romantic city fit for any itinerary, Paris brims with historic associations and remains vastly influential in the realms of culture, art, fashion, food and design.

On the 15th (Wed), explore the world behind art at Louvre Museum, admire the landmark architecture of Arc de Triomphe, and then explore the world behind art at Musee d'Orsay. Here are some ideas for day two: wander the streets of Saint Germain des Pres Quarter, then contemplate the long history of Eiffel Tower, then get a taste of the local shopping with Champs-Elysees, and finally pause for some serene contemplation at Basilique du Sacre-Coeur de Montmartre.

Traveling by flight from Venice to Paris takes 5 hours. Alternatively, you can do a combination of flight and train; or drive. In April, Paris is slightly colder than Venice - with highs of 18°C and lows of 6°C. Wrap up your sightseeing on the 16th (Thu) early enough to travel to Berlin.
more less

Things to do in Paris

Athens of the Spree

The country's capital and largest city, Berlin is a diverse urban center boasting a lively nightlife and countless things to do.

On the 17th (Fri), step into the grandiose world of Charlottenburg Palace, then pause for some photo ops at Brandenburg Gate, and then admire the masterpieces at Pergamonmuseum. Keep things going the next day: steep yourself in history at East Side Gallery, see the interesting displays at Topography of Terror, then take a stroll through Potsdamer Platz, and finally contemplate the long history of Memorial of the Berlin Wall.

For reviews, ratings, where to stay, and tourist information, read our Berlin driving holiday planner .

You can fly from Paris to Berlin in 5 hours. Other options are to take a train; or drive. Wrap up your sightseeing on the 18th (Sat) to allow time to travel back home.
more less

Things to do in Berlin

©
Memorial of the Berlin Wall