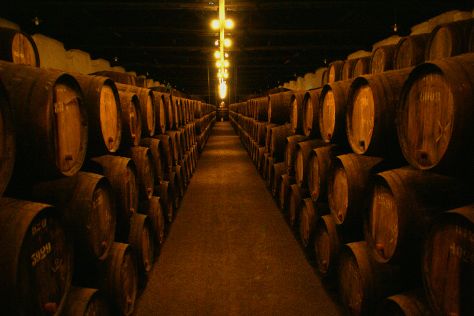 Called "Oporto" by many, the city of Porto along the Duoro River lent the country and Port wine their names. Portugal's second-largest metropolis dates back to the 4th century, representing both a rich cultural past and industrial present through its architecture and style.

Get some historical perspective at Centro Historico de Guimaraes and Se de Braga. Get in touch with nature at Praia da Luz and Douro River. Change things up with a short trip to Santuario de Santa Luzia in Viana do Castelo (about 1h 15 min away). Next up on the itinerary: learn about winemaking at Graham's Port Lodge, take in panoramic vistas at Torre dos Clerigos, admire the landmark architecture of Palacio da Bolsa, and steep yourself in history at Porto Cathedral (Se Catedral).

Philadelphia, USA to Porto is an approximately 11.5-hour flight. The time zone changes from Eastern Standard Time to Western European Standard Time, which is usually a 5 hour difference. Traveling from Philadelphia in May, expect nights in Porto to be about the same, around 52°F, while days are slightly colder, around 68°F. Cap off your sightseeing on the 17th (Wed) early enough to go by car to Coimbra.
more less

Things to do in Porto 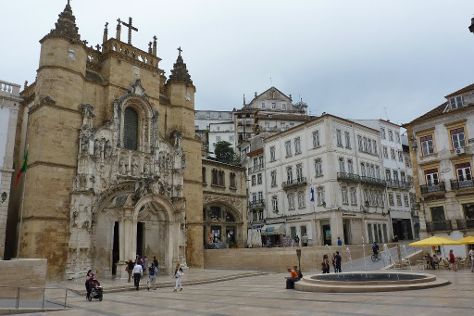 The university town of Coimbra exudes modern flair while embracing its roots as the medieval capital of Portugal.

Traveling by car from Porto to Coimbra takes 1.5 hours. Alternatively, you can take a train; or take a bus. In May, daily temperatures in Coimbra can reach 70°F, while at night they dip to 53°F. Wrap up your sightseeing on the 18th (Thu) to allow time to drive to Obidos.
more less

Things to do in Coimbra

Historic Sites
Find places to stay May 17 — 18:
Hotels on TripAdvisor
Homes on Airbnb
Highlights from your plan

Striking views of the Estremadura area and a famous medieval castle gave Obidos the name of Wedding Present Town.

Start off your visit on the 19th (Fri): explore the historical opulence of Castelo de Óbidos, contemplate in the serene atmosphere at Monastery of Alcobaca, and then stroll through Praia da Nazare.

To see traveler tips, where to stay, other places to visit, and more tourist information, read Obidos trip planner.

Traveling by car from Coimbra to Obidos takes 1.5 hours. Alternatively, you can take a bus; or take a train. May in Obidos sees daily highs of 70°F and lows of 53°F at night. Wrap up your sightseeing on the 19th (Fri) early enough to drive to Lisbon.
more less

Things to do in Obidos

Monastery of Alcobaca, Praia da Nazare
Find places to stay May 18 — 19:
Hotels on TripAdvisor
Homes on Airbnb
Highlights from your plan 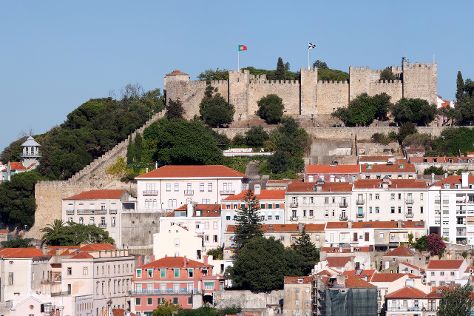 Built on seven hills, Lisbon has experienced a renaissance in recent years, making it the cultural star of Portugal.

Escape the urban bustle at Troia Beach and Ilha do Pessegueiro. Mosteiro dos Jeronimos and Castelo de S. Jorge are good opportunities to explore the local culture. You'll find plenty of places to visit near Lisbon: Grandola (Praia da Aberta Nova & Comporta Beach) and Pego Beach (in Carvalhal). There's much more to do: make a trip to Belém Tower, pause for some photo ops at Arco do Triunfo, and wander the streets of Alfama.

To see ratings, more things to do, maps, and other tourist information, refer to the Lisbon vacation planner.

You can drive from Obidos to Lisbon in 1.5 hours. Alternatively, you can take a bus; or take a train. In May, daytime highs in Lisbon are 75°F, while nighttime lows are 55°F. Finish up your sightseeing early on the 23rd (Tue) so you can go by car to Sintra.
more less

Things to do in Lisbon

Grandola, Ilha do Pessegueiro, Troia Beach, Pego Beach
Find places to stay May 19 — 23:
Hotels on TripAdvisor
Homes on Airbnb
Highlights from your plan

Surrounded by rolling hills and old mansions and castles, Sintra has become known as the first center of the European Romantic style.

Kick off your visit on the 24th (Wed): steep yourself in history at Castelo dos Mouros and then kick back and relax at Guincho Beach.

To find reviews, photos, where to stay, and other tourist information, use the Sintra planner.

Sintra is very close to Lisbon. In May, plan for daily highs up to 75°F, and evening lows to 56°F. Wrap up your sightseeing on the 24th (Wed) to allow time to drive to Evora.
more less

Things to do in Sintra

Guincho Beach
Find places to stay May 23 — 24:
Hotels on TripAdvisor
Homes on Airbnb
Highlights from your plan 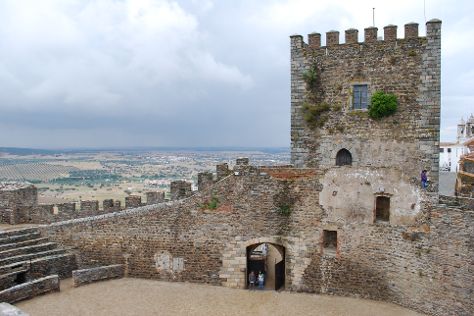 The city of Evora functions as a museum of Roman origins and medieval times.

Explore hidden gems such as Templo Romano de Evora (Templo de Diana) and Centro Historico de Evora. Do some cultural sightseeing at Cathedral of Evora (Se Catedral de Evora) and Monsaraz Castle and Walls. Change things up with these side-trips from Evora: Adega Mayor (in Campo Maior) and Pulo do Lobo (in Mertola). There's still lots to do: explore the ancient world of Centro Interpretativo dos Almendres, enjoy the scholastic atmosphere at University of Evora, and don't miss a visit to Praca do Giraldo.

To see more things to do, maps, photos, and other tourist information, you can read our Evora route planning site.

Traveling by car from Sintra to Evora takes 2 hours. Alternatively, you can take a train; or do a combination of train and bus. May in Evora sees daily highs of 79°F and lows of 53°F at night. Finish your sightseeing early on the 27th (Sat) so you can drive to Lagos.
more less

Things to do in Evora

Adega Mayor, Pulo do Lobo, Monsaraz Castle and Walls
Find places to stay May 24 — 27:
Hotels on TripAdvisor
Homes on Airbnb
Highlights from your plan

Jewel of the Algarve

The allure of the beaches and the town's historical center draw visitors to Lagos, a coastal destination in the Barlavento region of the Algarve.

Start off your visit on the 28th (Sun): tour the pleasant surroundings at Praia Dona Ana, wander the streets of Centro Historico de Albufeira, and then delve into the distant past at Castelo de Silves. Get ready for a full day of sightseeing on the next day: explore the striking landscape at Ponta da Piedade, visit a coastal fixture at Lagos Farol da Ponta da Piedade, and then enjoy the sand and surf at Praia do Camilo.

You can drive from Evora to Lagos in 3 hours. Alternatively, you can take a bus; or take a train. Traveling from Evora in May, plan for somewhat warmer nights in Lagos, with lows around 60°F. Wrap up your sightseeing on the 29th (Mon) to allow time to travel back home.
more less

Things to do in Lagos