Plan created by another user.Make it yours
Edit start date
Want to change plan duration? 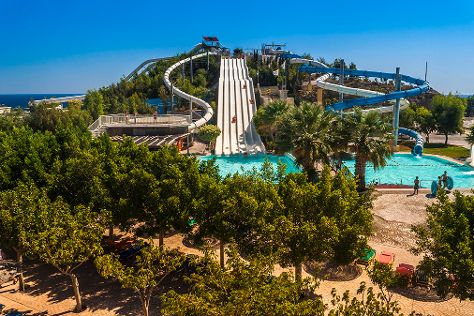 Famed for its sandy beaches, Faliraki serves as a major destination on the island of Rhodes.

Venture out of the city with trips to Agathi Beach (in Haraki), Valley of the Butterflies (in Petaloudes) and Lindos (Acropolis of Lindos, Lindos Beach, &more). On the 19th (Mon), enjoy a perfect day by the water at Faliraki Beach. There's much more to do: cool off at Water Park, step into the grandiose world of Palace of the Grand Master of the Knights of Rhodes, get to know the fascinating history of Medieval City, and enjoy the sand and surf at Tsambika Beach.

To see other places to visit, maps, ratings, and more tourist information, you can read our Faliraki itinerary maker.

Bydgoszcz, Poland to Faliraki is an approximately 14-hour combination of flight and car. The time zone difference moving from Central European Standard Time to Eastern European Standard Time is 1 hour. When traveling from Bydgoszcz in September, plan for a bit warmer days in Faliraki, with highs around 33°C, while nights are much warmer with lows around 26°C. Finish up your sightseeing early on the 23rd (Fri) so you can travel back home.
more less

Things to do in Faliraki